Matt de la Peña  gave a writing workshop for students today and a closing talk with teachers who were at Saturday Seminars with SJ Writing Project.  I am documentarian at SJAWP, among my other roles, so I got to spend the morning in Matt’s workshop with kids, and pop in an out of workshops for teachers. 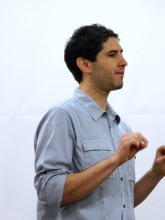 If you’ve heard Matt before, you know he’s a soft spoken masterful story teller.  He teaches with story. 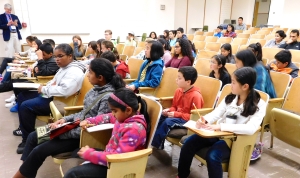 Today he asked the student writers to list 5 important things about themselves, then he gave them a more involved prompt.  He read an excerpt from a story by Amy Hempel.  A woman is on a ledge at the top of a building, preparing to jump off.  You’re a passerby below.  What do you say?  Write it. 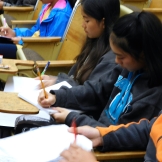 All around the auditorium students wrote.  I love taking pictures of kids reading, writing or talking.  Some wrote on their phones, in journals, on loose binder paper.  Matt leaned in an conferred while they worked. 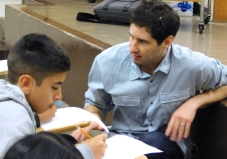 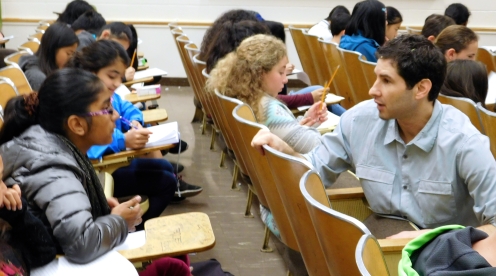 If there’s anything lovelier than kids writing, it’s a teacher right in with them whispering about what they’re working on.  An author at that!

When each shared, they read their list of 5 things, then the scene they wrote.  It demonstrated how much more engaging and informative the second piece was – better to know the writer.  I was moved by the variety of responses and their level of sophistication.  Writers from elementary, middle and high school shared. 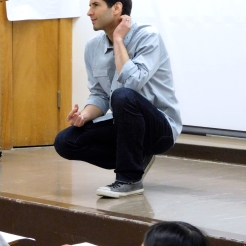 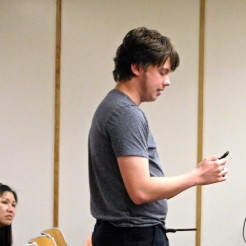 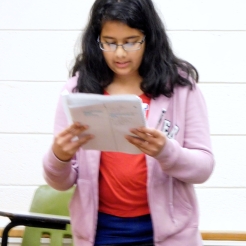 Matt led the writers on through more models and prompts.  He read a piece in which the writer summarized her life with two words, “Dusty driveway.” When he led the students to try their own, after sharing some from students around the country, they were not daunted.

The quiet energy in the room was palpable.  Matt had set the tone, raised the bar and the students went for it.

Student went out to the Hicklebee table to shop for books and teachers came from their seminars.  After some book signing, Matt gave a powerful biographical talk for us on several themes inherent in his books.  More stories, more truth.

I bought seven of his books and got started on Mexican Whiteboy during the book signing transition.  Teachers who stayed for lunch chatted out in the quad, where the rain had let up.  I wound up in a conversation with a new colleague who has trained at TCRWP two summers.  We compared notes on UOS and shared observations.  All that an a slice of cold combo pizza from Costco.

I came home and parked myself at my writing desk, where I was joined by my faithful cat.  While the rain tinkers down the gutters, Mickey sleeps and sleeps.  I crop and download pictures.  And share the morning here with my friends from Two Writing Teachers.

This site uses Akismet to reduce spam. Learn how your comment data is processed.